Three companies have announced that they will be withdrawing from the world conference in Barcelona. 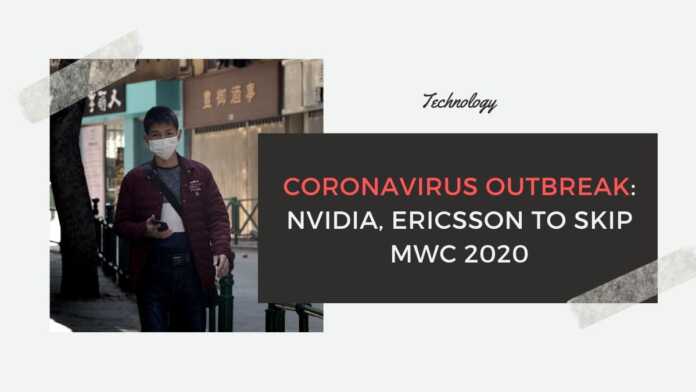 The Coronavirus outbreak has shown no signs of abating yet and understandably, a whole bunch of companies are dropping out of the Mobile World Congress (MWC) that is scheduled for the end of February in Barcelona.

All companies attending are varying of the outbreak and have expressed apprehensions while some have decided to pull out entirely, not willing to take any chances.

After South Korean LG withdrew recently, Swedish telecoms company Ericsson has also announced that it is going to withdraw from the MWC. Another name on the withdrawal list is Nvidia.

Ericsson said that they have closely monitored the development of the virus and have adhered to recommendations from relevant authorities and have picked the safety of its employees, customers, and stakeholders over everything else.

“The health and safety of our employees, customers, and other stakeholders are our highest priority. This is not a decision we have taken lightly,” said Borje Ekholm, President and CEO, Ericsson.

“We were looking forward to showcasing our latest innovations at MWC in Barcelona. It is very unfortunate, but we strongly believe the most responsible business decision is to withdraw our participation from this year’s event,” he added.

Ericsson also said that they have already taken precautionary measures to ensure the health and safety of employees and to minimize the impact on the company’s operations.

“After an extensive internal risk assessment, Ericsson has decided to take further precautionary measures by withdrawing from MWC Barcelona 2020, the largest event in the telecom industry,” it said in a statement.

To showcase the company’s portfolio and innovations, Ericsson said that they will be taking the demos and content created for MWC to customers in their home markets with local events called “Ericsson Unboxed”.

Nvidia is the fourth exhibitor at MCW to decide to partially or fully drop out. Nvidia is the first US company to do so, following Ericsson, LG, and ZTE. ZTE, however, has reportedly denied media reports of its non-participation to announce that they will go ahead as planned.

Nvidia was also “a major sponsor of the conference, and had partnered with the GSMA conference organizing body to host an entire track of 10 sessions and roundtables around artificial intelligence. It also planned to welcome visitors to an ‘AI Edge Innovation Center’ that would ‘put attendees at the intersection of AI, 5G and edge computing’,”.

However, at this point, it is not clear if the sessions and the exhibits will still be in offer. It seems like it is not going to be possible without its employees.

“We’ve been looking forward to sharing our work in AI, 5G and vRAN with the industry. We regret not attending, but believe this is the right decision,” reads a portion of Nvidia’s statement.

Earlier, LG Electronics said in a statement that with the safety of its employees, partners, and customers foremost in mind, “LG has decided to withdraw from exhibiting and participating in MWC 2020 later this month in Barcelona, Spain”.

MWC organizer GSMA has said that it is “monitoring and assessing the potential impact of the coronavirus on its events held annually in Barcelona, Shanghai and Los Angeles and as well as the Mobile 360 Series of regional conferences”.

Industry watchers are of the opinion that many other companies may follow suit and drop out.