The Cyberspace Administration of China informed TikTok’s operator it must take down its Feishu office collaboration tool from major domestic app stores for about a month. 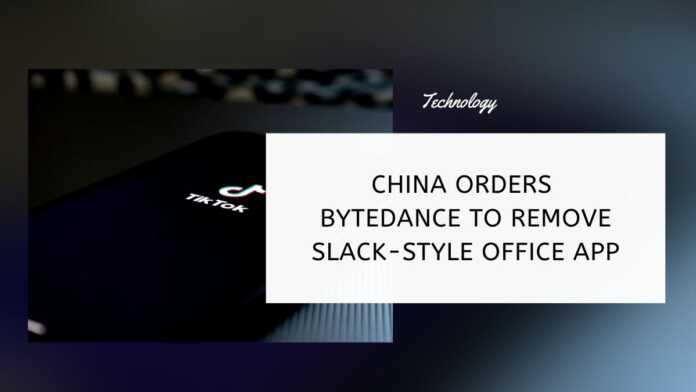 The Cyberspace Administration of China informed TikTok’s operator it must take down its Feishu office collaboration tool from major domestic app stores for about a month, people familiar with the matter said.

That was punishment for a feature that allowed users to browse posts from foreign platforms via a newsfeed function, the people said, asking not to be named because the decision hasn’t been made public. It’s unclear when the actual takedown will ensue, they added.

The decision deals a blow to ByteDance’s ambitions while casting an unwanted spotlight on Feishu, which became popular during the pandemic as a work-from-home alternative.

Feishu was intended to help spearhead a foray into the enterprise software market, which has skyrocketed since Covid-19 pushed millions of workers out of offices. The global market for collaborative apps grew from $14.8 billion in 2018 to $16.5 billion last year, according to IDC data.

Even with strong incumbents like Microsoft Corp. and Slack Technologies Inc., it has room for growth, and ByteDance has the added incentive of a spurt in demand in its home market.

DingTalk from Alibaba was the most downloaded free app on China’s iOS App Store for weeks during the nationwide lockdown. Feishu’s twin app for users outside China, called Lark, is operating as normal and targeted at markets including Japan and Singapore.

ByteDance declined to comment, and the CAC didn’t immediately respond to faxed and messaged requests for comment.

Staying on censors’ good side is key to the longer-term success of Chinese internet firms like ByteDance, the world’s largest startup. Beijing rigidly polices its online sphere, seeking to scrub content it considers a threat to social stability.

In 2018, ByteDance had to shut popular jokes app Neihan Duanzi after regulators complained about vulgar and improper content. In a similar vein this month, regulators ordered Baidu Inc. to suspend several news channels on its flagship search app.

That feature came as part of Feishu’s Workstation platform, they said, which helps businesses manage everything from paychecks to travel and leave approvals. But the action failed to stave off the regulatory clampdown, they said.

This week, the startup rolled out a pared-down version of Feishu without Workstation, hoping to continue capturing new downloads during the absence of its main app. Feishu Lite still offers key features from group chats and online document management to videoconferencing.

The regulatory blunder could disrupt the expansion of ByteDance’s fledgling enterprise wing, which has a team of more than 1,700 people and will add more as part of a global hiring spree. The unit is preparing to roll out a Google-like suite of office tools spun out from Feishu, Bloomberg News reported in March.