All three laptops by Acer come with a 12th-generation Intel Core processor. 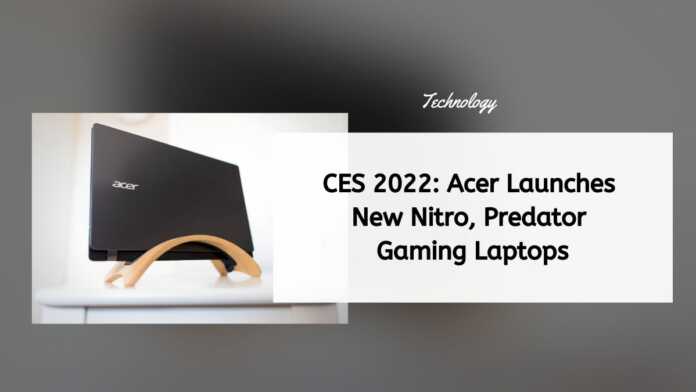 The new Acer Predator Triton 500 SE (PT516-52s) debuts as a “special edition” laptop meant for gaming and work. The laptop features a 16-inch display with WQXGA (2,560×1,600 pixels) resolution, 240Hz refresh rate, and up to three milliseconds of response time.

The display also has 500 nits of brightness, 100 percent coverage of DCI-P3 color gamut, and a 16:10 aspect ratio — alongside Nvidia G-Sync technology for frame syncing. Under the hood, the Predator Triton 500 SE has up to a 12th-generation Intel Core i9 processor, along with an Nvidia GeForce RTX 3080 Ti GPU and 32GB of 5200MHz LPDDR5 RAM. The laptop also has up to 2TB of high-speed PCIe Gen 4 storage.

Acer has also equipped the Predator Triton 500 SE with a triple-fan system which includes two 5th-Gen AeroBlade 3D fans with 89 metal blades each. The laptop also features the company’s Vortex Flow technology which redirects the airflow that the inbuilt fans generate to critical components.

The Predator Triton 500 SE runs on Windows 11 out-of-the-box and packs a 99.98Whr battery. It is equipped with USB 3.2 Gen 2 ports, which include two Thunderbolt 4 Type-C ports with support for DisplayPort and power delivery, and an HDMI 2.1 port.

The Predator Helios 300 (2022) has a light bar below the palm rest that is configurable via PredatorSense. The laptop also has a mini-LED backlit keyboard with RGB per-key.

Connectivity options on Acer Predator Helios 300 (2022) include an HDMI 2.1 port, a Thunderbolt Type-C port, and two USB 3.2 Gen 2 ports. One of the USB ports can also be used for charging mobile devices even when the laptop is turned off.

The new Predator Helios 300 also comes with Killer DoubleShot Pro (E2600+1675i) and Wi-Fi 6E connectivity support. It is designed with a dual-fan layout which includes a 5th-Gen AeroBlade 3D fan that keeps the system running cool.

There is a PredatorSense button that allows users to control the fan speed via four preset operating modes. Further, users can single press the inbuilt Turbo key to max out the preloaded settings for improved gaming performance, the company said.

Acer Nitro 5 (2022) comes in two distinct variants — one with up to a 12th-generation Intel Core i7 processor and the other one with up to an AMD Ryzen 6000 series processor. Both models come 15.6- and 17.3-inch screen options and with up to an Nvidia GeForce RTX 3070 Ti GPU option as well as up to 32GB of RAM. The Intel variant has DDR4 RAM support, while the AMD option offers maximum DDR5 RAM.

The Intel variant of Acer Nitro 5 (2022) comes with a pair of M.2 SSD slots (PCIe Gen 4) and features a QHD 165Hz display which offers a response time of three milliseconds. The laptop is also equipped with Intel Killer Ethernet E2600 and Intel Killer Wi-Fi 6 AX1650i for faster connectivity.

The AMD version of the Nitro 5 (2022) comes in two options — FHD display with a 144Hz refresh rate or a QHD 165Hz display. Both have AMD FreeSync for smooth gameplay. The laptop also comes with two M.2 PCIe Gen 4 SSD slots.

The Nitro 5 (2022) has a redesigned chassis with dual-fan cooling and four exhaust ports. The laptop also allows users to control the airflow using the preloaded NitroSense utility app.

On the connectivity front, the new Acer Nitro 5 has a range of ports, including HDMI 2.1 and USB 3.2 Gen 1 and Gen 2 support. The Intel-powered model also includes a Thunderbolt 4 Type-C port, while the AMD model has USB 4. The new Acer laptop has DTS:X Ultra audio technology to create a 3D spatial soundscape.

There is Windows 11 support out-of-the-box. The desktop also includes ARGB-infused Predator FrostBlade 2.0 fans support and is housed within an obsidian-hued tool-less chassis made of darkened glass and metal mesh.

Acer Predator Orion 5000 carries a starting price of $2,599 and will be available in North America starting February.