From Term Life to Ender's Game, here are some of the best Hailee Steinfeld movies to watch. 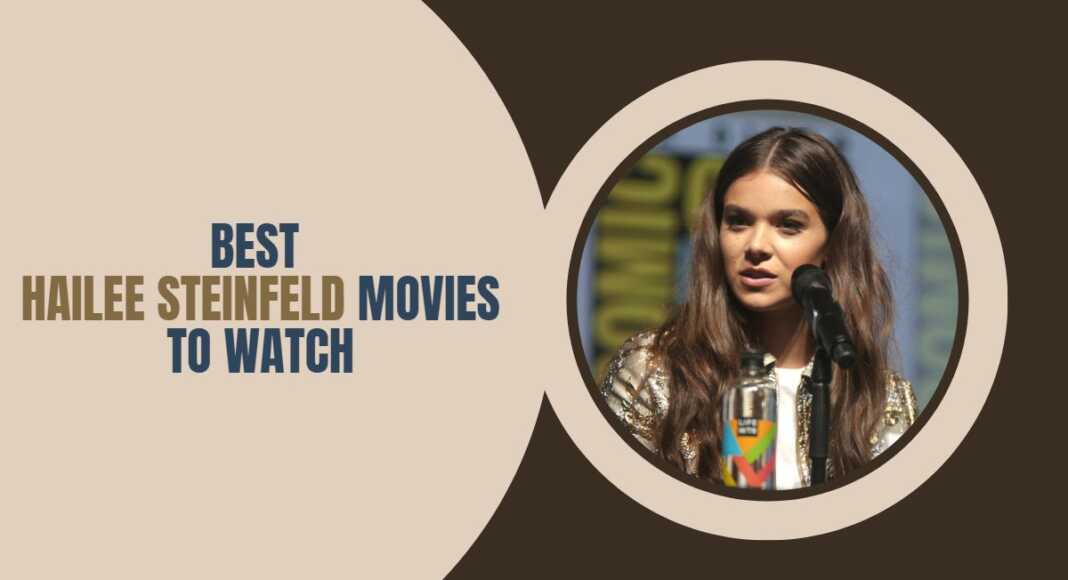 Best Hailee Steinfeld Movies: Hailee Steinfeld is an American actress, singer, and songwriter. She is best known for her role as Mattie Ross in the 2010 film True Grit, for which she was nominated for an Academy Award for Best Supporting Actress.

At the age of 8, Steinfeld started acting, and in the short film “She’s a Fox,” she made her professional acting debut. Since then, Steinfeld has acted in other movies, such as Ender’s Game, Pitch Perfect 2 and 3, The Edge of Seventeen, and Bumblebee. Additionally, she has acted in a number of television shows, such as Dickinson and Dickinson (Apple TV+).

The debut song from Steinfeld’s singing career, “Love Myself,” was released in 2013. Since then, she has released a number of songs and the EP “Haiz.”

The majority of Steinfeld’s music is pop, and it has been described as having a “soulful” sound. Steinfeld has a successful acting and singing career in addition to her involvement with the charity “Stand Up to Cancer” and other charitable organizations.

The film is directed by Travis Knight and written by Christina Hodson. During the Cybertron Civil War, Optimus Prime sends Autobot scout B-127 to Earth to form a base where they can regroup. Later, the scout befriends a girl named Charlie, who names him Bumblebee.

On a mission to find her father’s killer, a 14-year-old girl and the US Marshall she hires are joined by a Texas Ranger. The trio’s true grit is tested as they embark on a quest for justice.

The Edge of Seventeen is a 2016 American coming-of-age comedy-drama film written and directed by Kelly Fremon Craig, in her directorial debut.

Nadine has problems with her mother and brother and considers her father as her only ally. However, things take a turn for worse for her when her best friend, Krista, starts dating her brother.

Pitch Perfect 2 is a 2015 American musical comedy film directed and produced by Elizabeth Banks and written by Kay Cannon. It is a sequel to the 2012 film Pitch Perfect and the second installment in the Pitch Perfect film series.

The Barden Bellas, a cappella group, strive to resurrect their image after a disastrous performance. However, they enter a difficult international competition to try and regain their reputation.

Ender Wiggin, a brilliant young strategist, is recruited by the International Military to lead the force defending Earth from a genocidal alien race bent on annihilating humankind.

Begin Again is a 2013 American musical comedy-drama film written and directed by John Carney and starring Keira Knightley and Mark Ruffalo. Gretta, a budding songwriter, finds herself alone after her boyfriend Dave ditches her. Her life gains purpose when Dan, a record label executive, notices her talent.

Romeo & Juliet is a 2013 romantic drama film adaptation of William Shakespeare’s romantic tragedy of the same name written by Julian Fellowes and directed by Carlo Carlei. Two youngsters belonging to rival families meet by chance and fall in love. Their romance sets in motion a chain of events that tragically changes the fate of the two families.

3 Days to Kill is a 2014 action thriller film directed by McG and written by Luc Besson and Adi Hasak. After being diagnosed with a terminal illness, spy Ethan Renner decides to give up his career. While looking after his teenage daughter, he must finish his final mission of catching a terrorist.

Term Life is a 2016 American action drama film based on the graphic novel of the same name. It is directed by Peter Billingsley from a screenplay by A.J. Lieberman.

Nick Barrow, well-known for setting up heists, suddenly becomes the most wanted man in town. However, he tries to survive long enough so that his estranged daughter benefits from his insurance policy.

Towards the end of the Civil War, Augusta manages to escape an attempted assault by two rogue soldiers. Things take an unexpected turn when the two men track her down to her house.

Spider-Man: Into the Spider-Verse is a 2018 American computer-animated superhero film featuring the Marvel Comics character Miles Morales/Spider-Man, produced by Columbia Pictures and Sony Pictures Animation in association with Marvel Entertainment.

After gaining superpowers from a spider bite, Miles Morales protects the city as Spider-Man. Soon, he meets alternate versions of himself and gets embroiled in an epic battle to save the multiverse.

Charlie’s Angels is a 2019 American action comedy film written and directed by Elizabeth Banks from a story by Evan Spiliotopoulos and David Auburn. The film is the third installment in the Charlie’s Angels film series and serves as a continuation of the story.

A team of female private agents, popularly known as Charlie’s Angels, are tasked by their mysterious boss to expose an international conspiracy to weaponize an energy conservation device.