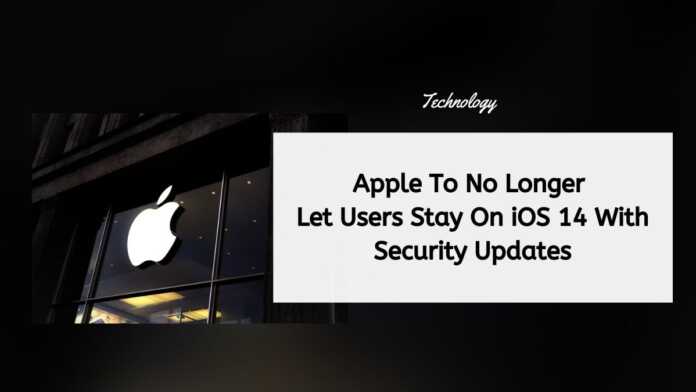 iOS 14 and iPadOS 14 are no longer getting security patches as Apple is intending to convince people to update their devices to the latest software releases. The Cupertino company originally gave iPhone and iPad users the option to stick to the older versions if they don’t want to update to iOS 15 or iPadOS 15.

For this, it promised to provide security patches for iOS 14 and iPadOS 14. Apple is, however, no longer providing any new updates to both software releases and has reportedly confirmed the move.

Apple told Ars Technica that the intention to provide security updates to iOS 14 and iPadOS 14 was of “temporary” nature. The company also redirected the tech publication to a support page published in September last year that noted that the previous iOS and iPadOS releases receiving security updates was meant only for “a period of time” and not intended for getting security patches forever. The page, though, doesn’t provide any specific timeline to confirm when exactly the change will come into force.

The features page for iOS 15 ambiguously mentioned users on iOS 14 will still get security patches from the company side.

The same description is available for iPadOS users on the features page of iPadOS 15. The grace period helped users stay unharmed from the bugs that were available in the early releases of iOS 15 and iPadOS 15.

But by not giving any further security patches to people using the last-generation iOS and iPadOS releases, Apple is essentially pushing them to update their devices to the latest iOS 15 and iPadOS 15 versions, which are iOS 15.2.1 and iPadOS 15.2.1, respectively. Among other possible goals, it will help the company increase the base of its iOS 15 and iPadOS 15 users in the market.

In the past, Apple managed to provide security patches to its older iOS versions for quite some time. The company, for instance, continued to support iOS 12 users throughout the iOS 13 and iOS 14 lifecycles.

The reason for that, though, could be the fact that some devices running on iOS 12 were not eligible for receiving newer iOS releases. This is not the case with iOS 14 and iPadOS 14 as all their compatible devices are eligible for iOS 15 and iPadOS 15, respectively.

Further, the move by Apple simply means that you should update your device to the latest iOS or iPadOS release in order to have all the fresh security patches installed.