Apple To Allow Stadia, xCloud On The App Store With Restrictions 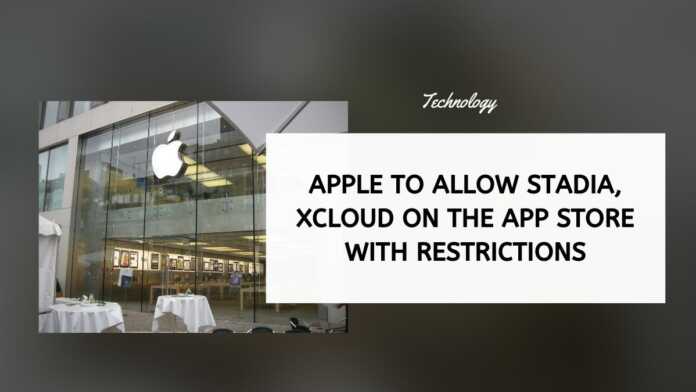 After refusing to allow cloud gaming apps like Google Stadia and Microsoft xCloud on the App Store for the longest time, Apple is now revising policies to allow them in.

The new rules that Apple has drawn up have a whole section dedicated to streaming services and how they will fit into the App Store ecosystem.

Apple is going to permit services to get App Store catalog apps and access to the payment apparatus, but every game must pass through an individual review process.

The rules state that each game update must be submitted for review and developers have to provide appropriate metadata for search. Games must also use in-app purchase options to unlock features or functionality.

For streaming services like Stadia and xCloud, each game on offer will have to be submitted as an individual app so that it has an App Store product page, appears in searches and charts, has user ratings and reviews and can be managed with Screen Time, parental controls and appears as an app on the device. These games must also use the “Sign in with Apple” option.

This essentially makes the job that much harder for the likes of Stadia and xCloud that has hundreds of games on offer. Microsoft told The Verge that this makes for bad customer experience.

The whole idea behind cloud gaming is that gamers get to jump directly into a game from their curated catalog within one app and not have to download it.

However, despite these evident issues, there is scope for streaming services to be on the App Store with Apple trying to meet Microsoft and Google “half way”. Now, whether they agree or not remains to be seen.

One other change in App Store rules is that apps that are free versions of the paid web-based tools do not need to be on Apple’s purchasing system. This means that those apps can avoid Apple’s fees.