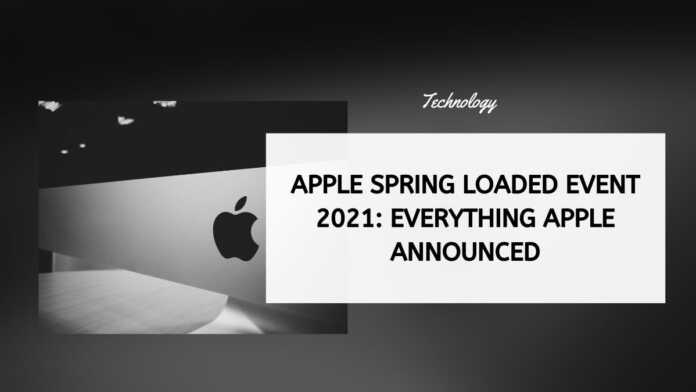 Apple hosted its first major event of the year. The company today launched the next-generation Apple TV 4K along with a new Siri remote.

On the software front, the company launched a podcast streaming service. It also announced a redesigned version of its existing Podcasts app. Previously, reports had hinted towards the company making an announcement about iOS 14.5. But that didn’t happen. It is possible that Apple is keeping all software-related announcements for WWDC 2021 that will be held virtually starting June 7 this year.

In case you missed the event, here’s everything that Apple announced at its Spring Loaded 2021 event:

Apple today introduced a new version of the Apple Card. It will allow up to five members in a family to share their Apple Card, track purchases, manage spending, and build credit together with their Family Sharing group. It enables two people to co-own an Apple Card and share and merge their credit lines. It also enables parents to share Apple Cards with their children. It will be available in the US in May this year.

Apple today launched Apple Podcasts Subscriptions. It will offer content created by users’ favorite creators alongside millions of free shows on Apple Podcasts. The service will get a new Channel feature next month that will enable listeners to enjoy shows curated by creators with unique titles, descriptions, and artwork. It will be available to listeners in over 170 countries and regions starting May this year.

Apple also said that customers can also complement their iPhone with a new MagSafe Leather Case or Leather Sleeve in Deep Violet, a Silicone Case in Capri Blue, Pistachio, Cantaloupe, or Amethyst, or a Leather Wallet in Arizona. The Purple color variant of the iPhone 12 and the iPhone 12 Mini will be up for pre-order starting April 23 and it will go on sale on April 30.

Apple finally launched the AirTag today. It connects with the company’s Find My app to track the connected item. Apple says that it can help locate a lost item while keeping location data private and anonymous with end-to-end encryption. A single AirTag costs $29 and a pack of four costs $99. It will be available for purchase in the US beginning April 30.

Apple introduced the new iMac computer that is powered by the company’s M1 chip. It features a 24-inch 4.5K Retina display with 11.3 million pixels and 500 nits of brightness. It also features a 1080p FaceTime HD camera, studio-quality mics, and a six-speaker sound system.