Apple Pencil 3 Might Also Show Up On April 20 Event

If you have been following the leaks lately, the third-generation Apple Pencil did leak in an image a few days ago. 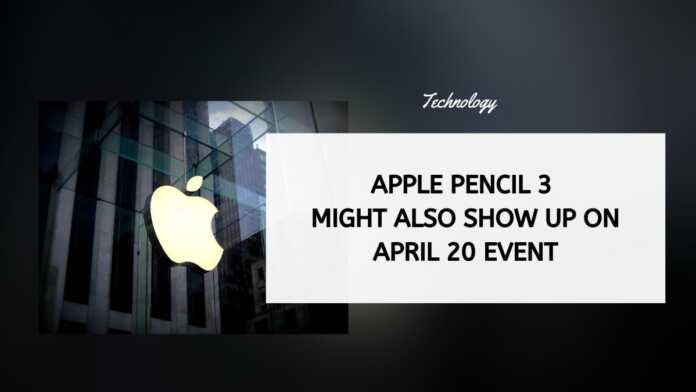 A couple of days ago Apple announced its April 20 ‘Spring Loaded’ event. And based on rumors and speculations, the firm is expected to bring out some hardware including a new Mini-LED iPad Pro, AirTags, and probably new MacBooks with M1X processor.

However, according to a new piece of information leaked on Weibo (via 9to5 Mac), there might be one more hardware that may see the light of the day at the event – Apple Pencil 3.

If you have been following the leaks lately, the third-generation Apple Pencil did leak in an image a few days ago. However, from the image, it was difficult to say if that was the second or third generation. The only visual change one could notice was that the build was glossy instead of matte.

Apple updating the Pencil also makes sense considering it last introduced the Apple Pencil 2 back in 2018 alongside the iPad Pro. For now, the company sells both the first and second generation of this accessory since some of the iPads like the 9.7-inch iPad and iPad mini do not support the 2nd-gen Pencil.

Not much has been talked about by tipsters and analysts about the Apple Pencil 3 but speculation on the web suggests new sensors with better precision and new features exclusive to the Mini-LED display of the 2021 iPad Pro.

As for the upcoming iPad Pro, it has been also rumored that the new iPad will be powered by Apple’s A14X Bionic processor, which could be as powerful as the M1 Apple Silicon that was introduced for Mac devices last year.