Apple said some 2019 iPad Air models have a problem which causes the screen to go blank permanently. 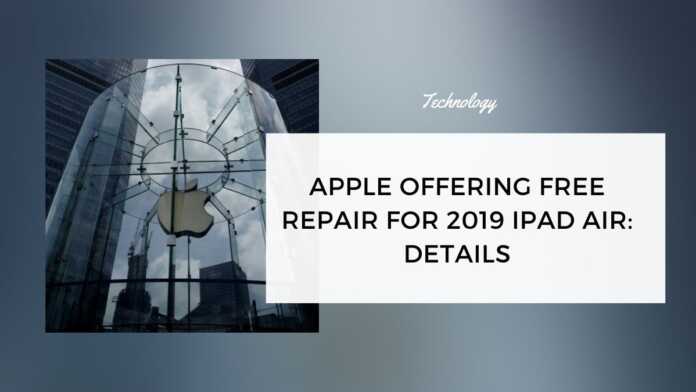 Apple has started a free repair program for its third-generation iPad Air. This for iPad Air models suffering from a “blank screen issue” which can render the iPad’s display disabled permanently.

Apple explains that iPad Air models that are affected will show a “brief flicker or flash” just before the display goes permanently blank. Also, this is for those iPad Air models manufactured between March 2019 and October 2019.

iPad Air users who are facing this issue can contact get their devices fixed free of charge at authorized Apple service providers. Users can also make an appointment at an Apple retail store or contact Apple Support through an email. Apple users in India can head to authorized resellers for getting their affected iPad Air repaired.

Apple advises that users should back up their data before handing over the iPad for repair. Also, this repair program doesn’t cover damages outside the confirmed issue like cracked screens and such.

Consumers would have to pay for such repairs. This iPad Air repair program is valid for two years after the first sale of the device.

Apple upgraded the iPad Air after almost five years in 2019. The 3rd generation iPad Air comes with a 10.5-inch Retina display, A12 Bionic chipset, and support for Apple Pencil.

The iPad Air has an 8-megapixel rear camera and a 7-megapixel selfie camera. There’s a cellular and Wi-Fi only version for the iPad Air.