Apple Music Pays Artists An Average Of $0.01 Per Stream

Apple has sent out an open letter to artists detail how royalties are paid on its streaming service. 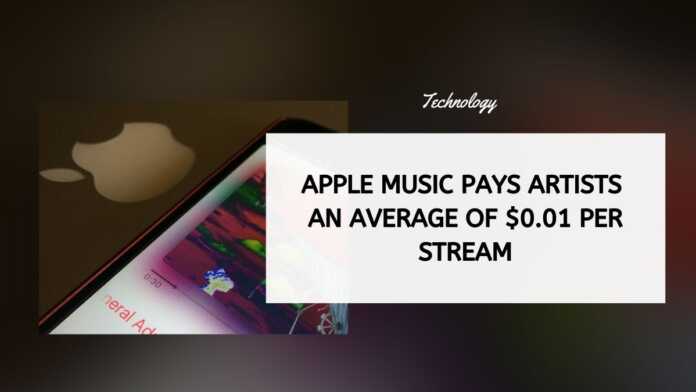 Apple has revealed for the first time how much artists are paid on its Apple Music streaming service. Apple revealed this through an open letter sent to artists which is said to be part of a new series to keep artists informed about royalties. This was first reported by the Wall Street Journal, and the full letter has been published by 9to5Mac.

Apple in its letter said that it pays artists an average of $0.01 per stream. The company also highlighted that it pays the same 52% headline rate to all labels as opposed to some services which pay “a substantially lower rate” to independent labels. The same headline rate is also paid to every publisher and licensor in all countries.

Apple hasn’t detailed though exactly how much artists are paid as this can vary in different markets. The rate will differ based on the subscription plan in each country. In the US, the monthly plan is $9.99.

Apple also has cheaper plans for students and family members. It also offers an Apple Music subscription bundled with Apple One which drastically reduces the price one would pay monthly.

“These tastemakers select music based on merit and we do not ask anyone to accept a lower royalty rate in exchange for featuring. The same is true for Apple Music’s personalized playlists and algorithmic recommendations,” Apple said in its letter.

In 2020, Apple said it paid out royalties to more than 5 million recording artists which is over 1 million more than what it paid in 2019.