Apple Launches Web Page With Privacy Labels For Its Apps

Apple bought in privacy labels on the App Store in December last year to provide users with a broad overview regarding the types of data any app collects. 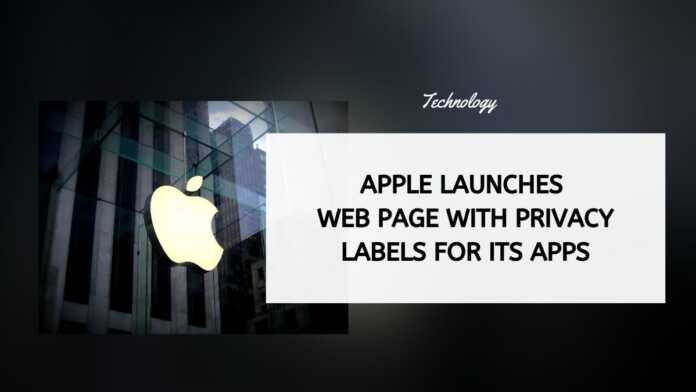 Apple has updated its privacy website with a new “Labels” section that brings in privacy labels for all of Apple’s in-house apps in one place. This will make it easier for users to learn about how which Apple app handles user’s personal data.

The privacy labels are not new though, Apple already had privacy labels for all its apps since they launched the feature last year but they were all on their individual support pages. This new “Labels” section just makes it easier to see all of it in one place and it is also arranged in alphabetical order.

Privacy labels are available for Apple’s apps across iOS, macOS, watchOS, tvOS and iPadOS, so some of the apps like GarageBand appear more than once on the list. Apple has also put in labels for developer tools like Xcode and also the App Store itself.

Apple has emphasized that users will not find any data under the “Data Used to Track You” for any of its apps as they do not track users and they hold themselves at a higher standard than they have for other developers. Other developers are allowed to “track users” if they obtain permission for it via the App Tracking Transparency framework that will be enforced with iOS 14.5.

Apple brought in privacy labels on the App Store in December last year to provide users with a broad overview regarding the types of data any app collects. These labels also inform users if this data can be used to track them or if it is linked to their identity or device in any way.

Apple has issued a directive requiring developers to fill out privacy labels when they submit new apps and app updates to the App Store since early December, however, these labels work on an honour system.

Apple has said that it conducts routine and ongoing audits of the information provided by these developers and apps and works with them to correct any inaccuracies. Apps that fail to comply will ultimately be removed from the App Store.