Report suggests that Apple iPhone 12 high-end models will be available with 6GB of RAM while the low-end ones will pack 4GB of RAM. 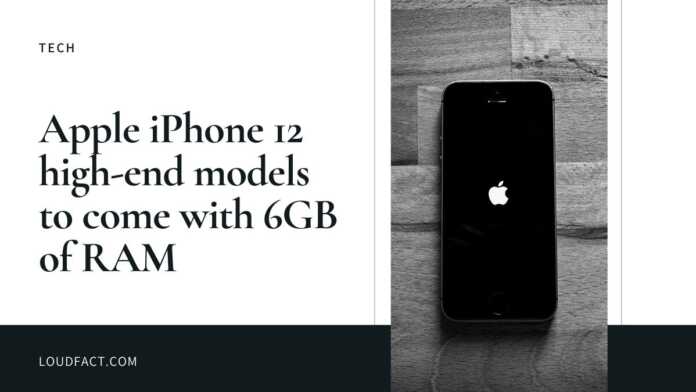 Apple’s 2020 iPhone launch is still months away but predictions are already in on what to expect. A fresh one by UBS analysts Timothy Arcuri and Munjal Shah detail the camera features and RAM variants for all the iPhone 12 models.

According to the research note (via MacRumors), Apple will launch four new iPhones of 5.4-inch, 6.7-inch, and two 6.1-inch screen sizes.

All four iPhones are also said to feature OLED displays. This would be a change considering Apple has been shipping the ‘affordable’ iPhone XR and iPhone 11 with LCD displays.

As for the high-end 6-inch iPhone, this one will house a triple rear camera setup with 3D sensing and pack 6GB of RAM. The 6.7-inch iPhone will also have the same cameras and RAM.

The latest predictions on the 2020 iPhone lineup are in line with what has been said by Apple analyst Ming-Chi Kuo and Barclays’ as well. Kuo had also recently said that Apple’s 2020 iPhones with 5G will be commercially available this fall. The 5G iPhones will be available in five markets including the UK, the US, Canada, Japan, and South Korea.

Apple’s three main flagship models are said to come with 5G support. The company will launch 4G variants of the iPhones as well. Apple is also expected to launch the iPhone SE 2 dubbed ‘iPhone 9’ earlier in the first half this year. iPhone 9 is expected to come with iPhone 11’s hardware but with a dated design like the iPhone 8 along with Touch ID.