This feature lets you hear news stories if you have subscribed to Apple News+ and can be accessed through Siri too. 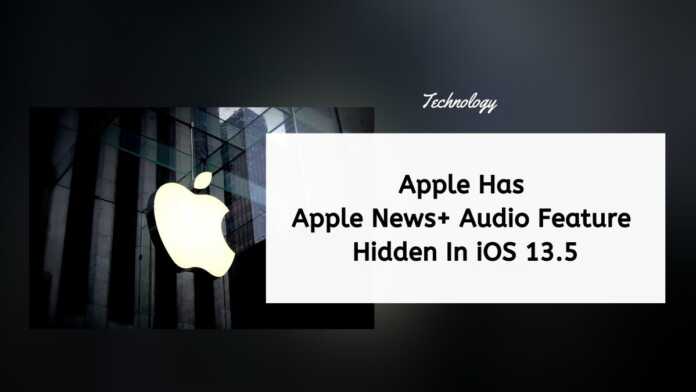 Apple’s iOS 13.5.1 update has rolled out to the public and the first beta version of the iOS 13.5.5 has also been made available and beta testers have been able to access a new Apple News+ Audio feature on this beta update.

Reports from last month had mentioned that Apple was working on audio stories for Apple News+ subscribers and that’s been confirmed by what’s been spotted on iOS 13.5.5 beta.

Hidden in the update, the Apple News+ Audio can be accessed through the existing News app which will now get a new ‘Audio’ tab.

Spotted by 9to5Mac, the interface of the new Apple News+ Audio looks pretty simple and gives users access to recorded audio news instead of text. Users can tap on the ‘Play’ button and listen to all news or choose a particular story to hear.

Once you pick a story, the app shows a media player, much like it is with the Apple Podcast app. The player lets you rewind 15 seconds of the clip, skip to the next story and adjust the playback speed. And instead of a white background on the app, you get to see a blurred picture of the background cover.

The audio tab in Apple News shows up for all users but only the Apple News+ subscribers get access to full stories. If you are not a subscriber all you will get to hear are previews of the latest news.

iOS 13.5.5’s beta code also points to the fact that Apple News+ Audio will come with support for integration with Siri. You will be able to hear the latest news on iPhone, iPad, or HomePod by just asking Siri.

This feature is fully functional right now, just that it’s hidden so it’s definitely coming, we just don’t know when yet.