Apple Car Might Not Launch Until 2028, Says Analyst Ming-Chi Kuo

Kuo has also cautioned against the hype around Apple’s autonomous car project. 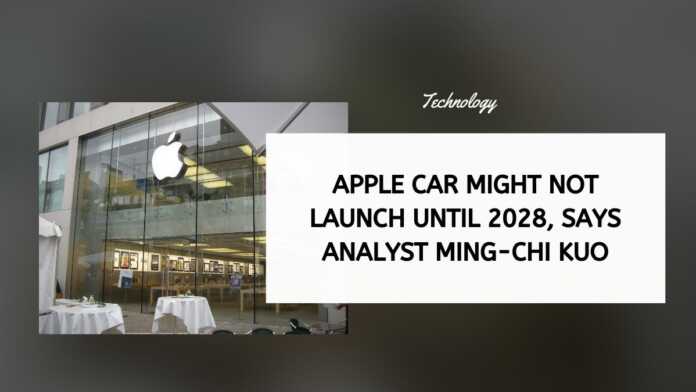 Apple Car rumors have been doing the rounds for years. They re-emerged earlier this month after a Reuters report said the company is moving fast with its autonomous car project with a “breakthrough battery technology.”

Even as the report pegged the Apple Car to release in 2024, Apple analyst Ming-Chi Kuo says the car will be officially launched between 2025-2028 at the earliest.

According to AppleInsider, Kuo also cautioned investors against the hype around the reports on an Apple Car. The analyst said purchasing shares of the companies involved in the project was a “knee-jerk reaction that could be short-lived.”

He highlighted that there was uncertainty around the launch schedule as well as there is no clarity on “Apple’s competitiveness in the EV/self-driving car market.”

“Due to changes in the EV/self-driving market and Apple’s high-quality standards, we would not be surprised if Apple Car’s launch schedule is postponed to 2028 or later,” Kuo wrote in a note.

The analyst also played down the possible specifications and suppliers mentioned in some of the recent reports. He said that these were mere speculations by the market and “do not involve actual Apple Car suppliers.”

Kuo, however, also highlighted some positives of Apple venturing into the autonomous car project. He said that the biggest strength of Apple is going to be the big data or Artificial Intelligence instead of the hardware.

That said, Kuo’s analysis does not completely reject the recent reports on Apple Car. It is worth noting that different analysts and industry watchers have come up with different timelines for the commercial roll-out of an Apple Car. For instance, Goldman Sachs recently talked about a 2024 timing.

The Apple car program, also known as Project Titan, has been in development for years. The company has also acquired relevant startups and hired experts to accelerate the project.