Seems like this is probably not the one-handed mode most users were looking for. 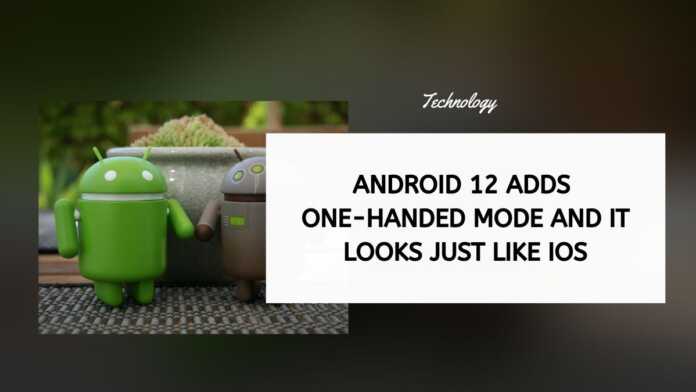 It has been years since small phones that could be operated with one hand were in fashion, and devices like the Pixel 4a, the iPhone SE, and the iPhone 12 Mini are among the handful of exceptions among the 6.7-inch phones that manufacturers keep releasing.

While a bigger screen is good for watching content and gaming, companies usually build in a “one-hand mode” for ease of operation.

While custom ROM developers and manufacturers like Samsung, Realme, Apple, and many others have shipped one-handed mode for years, phones running Google’s version of Android as well as Android One devices had no such option.

That seems set to change with the arrival of the company’s Android 12 Developer Preview, according to a tweet from XDA’s Mishaal Rahman.

However, instead of reducing the visible part of the screen to a percentage and bringing it down to the bottom, as Samsung does, it looks like Google has decided to copy Reachability – Apple’s implementation of one-hand mode.

Unlike Samsung’s version of the reachable interface, you can’t access a scaled-down version of the entire screen – instead, Android 12 drags the top half of your screen down and replaces the bottom half so you can pull down the notification bar or tap some icons or widgets at the top of the screen.

While the feature seems ready from the video in the tweet, it is unclear if Google plans to include this with Android 12’s release – after all, scrolling screenshots were present in Android 11’s Developer Previews but never made it to the final release.