The company, which has reported virus cases among warehouse staff and faced several demonstrations, said it would start testing hundreds of thousands of employees a day for fevers. 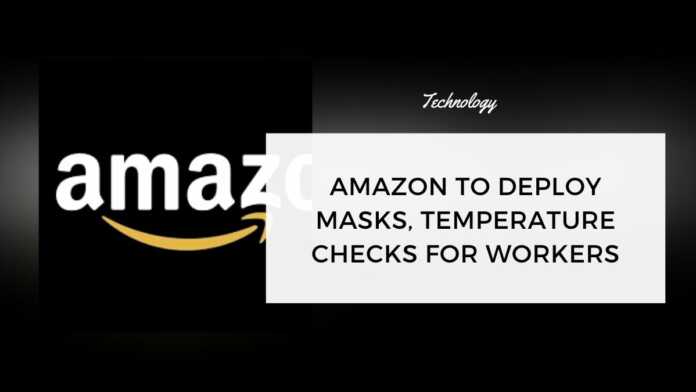 Amazon.com Inc plans to roll out temperature checks and face masks for staff at all its U.S. and European warehouses plus Whole Foods stores by early next week, a huge deployment for workers on the front lines of the coronavirus outbreak.

The company, which has reported virus cases among warehouse staff and faced several demonstrations, said it would start testing hundreds of thousands of employees a day for fevers.

It told Reuters it would use no-contact forehead thermometers at site entrances and send anyone registering more than 100.4 Fahrenheit (38 Celsius) home.

All locations will have surgical masks available by early next week, after millions were ordered weeks ago, according to Amazon.

Particle-blocking N95 masks it has ordered will instead be donated to medical workers or sold at cost to government and healthcare organizations, it said.

The company will also use machine-learning software to monitor building cameras and determine whether employees are staying at safe distances during their shifts, or whether they are often huddled too close together.

The plans, previously unreported, show how the world’s largest online retailer is aiming to mitigate the major health risks facing its staff.

Like first responders, workers are bringing food and essential goods to millions of people whom governments have told to stay at home. But doing so puts staff into proximity with countless others at warehouses, at grocery stores, and at shoppers’ doorsteps, increasing the likelihood they will contract the COVID-19 disease.

Walmart Inc, the largest US employer, said earlier this week it would take employees’ temperature and provide them with masks.

Amazon said the mask rollout was underway. Temperature scans have begun at facilities near its Seattle headquarters and in New York. The company has already ramped up to more than 100,000 employee checks daily, with more sites to come.

Workers with high temperatures will have to stay home until they pass three days without a fever, the company said.

The retailer has more than 700 facilities in its U.S. and European distribution network, according to logistics consultancy MWPVL International Inc. Amazon-owned Whole Foods has 508 stores, according to the grocer’s website.